Our Lady of Guadalupe

In 1531, Our Lady appeared in Guadalupe, Mexico, to a humble Mexican peasant named Juan Diego (now Saint Juan Diego), who had recently converted to Christianity. Our Lady left a Miraculous Image of her appearance on his tilma (cloak), which still exists today for all to see in the Basilica of Our Lady of Guadalupe in Mexico City. In the Image, Our Lady appears as a young virgin of noble birth, who is expecting a child. At that time the prevailing Aztec culture had, as part of its religious practices, the worship of a number of deities, and child sacrifice was a feature.

As an Aztec, one look at this Holy Image would immediately bring to mind the cultural symbols that were important to this people, from the top of her head down to her feet. Each part of Our Lady of Guadalupe’s Holy Image carries a supernatural significance, parallel to the symbols used by the ancient culture of Aztec. As a result, multitudes converted to Christian Faith over the next few years.

Because of this, and of the whole history of the apparitions to Juan Diego, Our Lady of Guadalupe is seen as the Patron of the Pro-Life movement in many countries.

Saint John Paul II authorised the creation of 220 digital replicas of this blessed original image of Our Lady of Guadalupe for worldwide distribution. These consecrated images have been declared as Authorised Relics that extend the graces of evangelisation, conversion and truth to those nations which receive them; the same graces as extended in 1531.

If you wish to find more information about the Image it can be found at http://www.relicourladyofguadalupe.co.uk/ 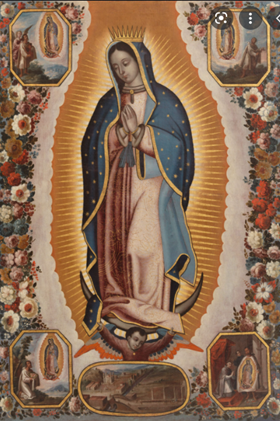